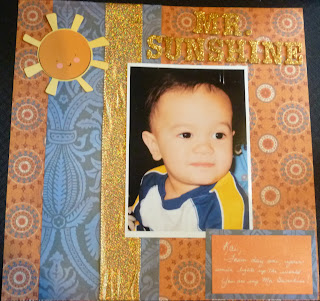 Another cold and gray day out, so all I could think of to do was one more layout.
This came to me this morning.   I didn't think I would come up with another layout for Scrappin-n-Chattin in February, but then I thought of the new comedy on ABC that started a couple of weeks ago, called Mr. Sunshine and describes Kai so well, thus the layout I made.   This picture was taken when he was about 18 months old, I cropped him out of a group picture for the layout.  I actually finished all 10 layouts now for this month, never thinking I would get that many completed, but I did with even a few days to spare.
I even used old and new, the 2 pieces of paper came out of the new paper pack I bought on Monday, plus for the sun I used the latest cricut cartridge that I had bought most recently.   The old is the gold ribbon, I had saved a long piece of it that was on a Christmas gift several years ago, was just to pretty to throw out, so now I've used some of it.
Posted by Barbara Greenberg at 2:51 PM

Absolutely beautiful, Barbara. I love the sun! Love the colors you chose, too. Clever use of the TV title challenge.